My apartment was completed in 2008 and I needed to get some lights, in fact it was lots of lights for the multiple rooms I have. There are many lighting shops in KL so where do I start as an Englishman because it’s easy to end up paying inflated prices.

The contractor I was using at the time recommended a small simple place called Hup Hoe Electrical in Jalan Ipoh, KL and in addition this there are a couple of other electrical shops nearby so its handy location. I have to say that was initially sceptical when I walked in because it’s just a simple traditional shop but I found the service and prices good so no complaints what so ever.

Fast forward to 2011 we are having some renovation done and needed a few more lights of a similar kind to those purchased from Hup Hoe before. When I visited a few weeks ago nothing had really changed in the shop since 2008 and it was good to be recognised by their staff as a previous customer and then offered several discounts without having to ask.

In Malaysia I sometimes find that the service really sucks but at this shop was its really refreshing to find that I was both recognised and the discount was applied without asking.

Kudus to the team at Hup Hoe Electrical……

So today was the day that Steve Jobs sadly passed away and world lost a great leader of innovation in technology.

Whilst I’m not an owner of any Apple products and to an extent I fail to understand the hype around them I cannot dispute that that Apple have some fine products in their portfolio.

Having been born in ’72 I’ve been lucky enough to witness the birth of home computing and to an extent I’ve been an early adopter in some cases thanks to my wonderful parents. In many instances Apple have been a leader in innovation and seem to be able to deliver what people either want or will want when they see it. I also remember the years when Apple struggled somewhat and its good see them recover.

Today the mainstream media has provided almost blanket coverage to the passing of Steve and its interesting to look back at the early products as well as see a reply of the Iphone and Ipad launches and who would have predicted a phenomenal success that followed those launches.

But there is one thing there that both disturbs and annoys me immensely about the reaction to Steve’s death. On CNN tonight they are showing articles on the worldwide reaction which included people are leaving flowers outside Apple shops and people who have downloaded apps to show a candle. In addition people were interviewed who seem to have been brainwashed into buying everything Apple and made comments about how Apple has changed their lives etc etc.

My Facebook wall is inundated with messages commenting on the sad news but I can’t help feeling that it’s a massive over reaction.

Steve Jobs was a fantastic innovator and successful businessman but what else? Why is it that he has been elevated to some kind of super hero status?

As per press reports Steve has not donated anywhere near as much money to charitable causes as some other prominent businessmen and Apple has been criticized over its green tech polices as well as questionable ethical issues over the choice of factories and their labour polices in Asia.

Yes the passing of Steve Job’s is a very sad event but get a grip because there are far bigger more important issues in the world that you should be concerned about.

Whilst I’m a fan of social networking I can’t help feel uncomfortable with the way that everybody seems share their grief on Facebook and Twitter without even thinking about what they are saying or doing.

Now I know I said Im not a big fan of Apple products but I’m thinking about getting a tab at some point , Ipad 2, Galaxy or wait for Ipad 3? At the moment I’m learning to the former when it comes out.

My first week in Malaysia back in September 2000 was somewhat what of a whirlwind. Coupled with the excitement of exploring the nightlife in my new home and my London colleagues travelling on a business trip to KL at the same time it was a absolutely manic. One of the first places we visited was House Frankfurt in Bangsar Baru and I still remember my lack of enthusiasm as a brit having to visit a German restaurant and bar in Malaysia.

I remember that I enjoyed the food and atmosphere and subsequently returned several times over the following years and was never disappointed.

Bangsar has gone through many changes over the years and despite the nightlife scene effectively ending in 2003/4 there are still some good places to eat and drink and House Frankfurt is one of them still going strong. 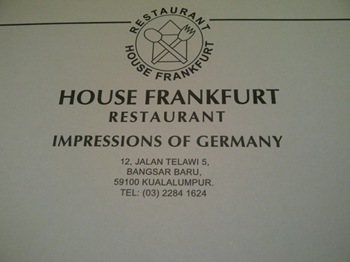 I often walk past in the afternoon and see Peter (the owner) give me a wave and feel somewhat guilty that we don’t visit anywhere near as often as we should.

We recently found ourselves in Bangsar early one Saturday evening and decided to call in. A warm welcome was received from Peter and decided to sit at the bar 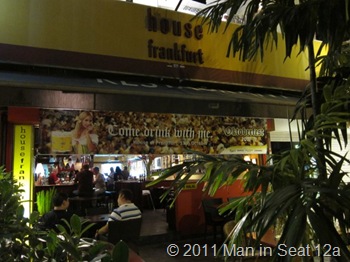 The drinks selection is not as extensive as some other speciality bars and restaurants although there was no complaints from myself.

For dinner I ordered a bruschetta as an appetiser and a chicken schnitzel as the main course. 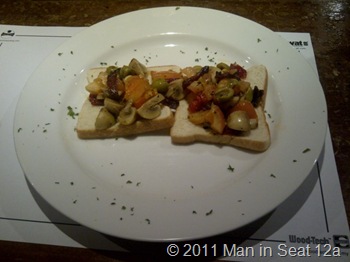 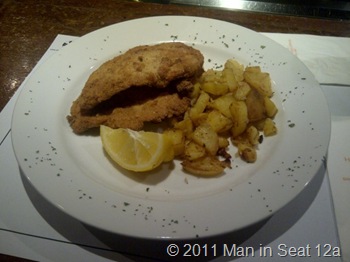 The bruschetta was a little plain being serviced on sliced bread but schnitzel and the accompanying potatoes were tasty. 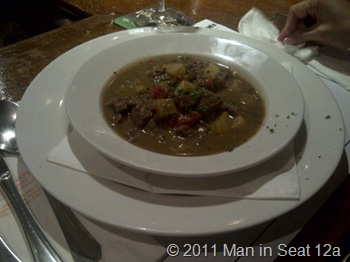 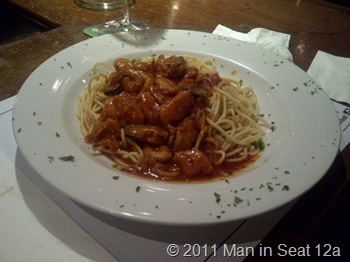 Overall I enjoyed my visit and will return again, hopefully on a more frequent basis