I’ve been meaning to write this for a while and when I saw the issue had been mentioned in the timeout KL’s blog I thought I’d better get this finished.

Like many people in KL I have a Touch n Go card and often despair at how crap the card and associated systems are.

Some of my key frustrations are as follows:

Rapid KL recently introduced some rather poorly design top up machines at many stations and I thought for a moment that a step forward was being taken. After a very protracted installation I find that the machines are always broken or just displaying Tiada servis’ (no service). 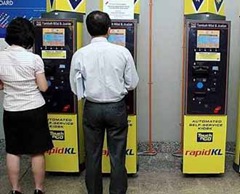 In the rare event that I do find a machine working there is never a queue to use it because most people have given up looking to see if they work and secondly the machines confuse the hell out of most poeple.

If Rapid KL really wants to improve it should fire the people who decided buy these crap machines and hire some people from a place which knows how to run a public transport and smart card system. The Man In Seat 12A has a good suggestion which is to look 330km southeast to a small island called Singapore!