Beating the system at Tiger Airways

These days I often find that Tiger Airways are the cheapest for my Friday night commute back from Singapore . Like many others I have my own system and ways of doing things just like the commuters in UK who stand in the exact same spot every day when boarding their train.

Although Tiger are a budget airline they are generally pretty good provided the flight runs on time etc although there is one area that is a continued area that's often struggle – the check-in!

As with other airlines Tiger has implemented a series of common check in areas for several flights are once. Tiger’s has a fleet of A320 aircraft which hold approximately 180 passengers each. The check in system results in 100’s of people at each zone being served by only two or three counters, hence long and slow moving queues.

A little trick I picked up when the budget terminal was open was that 15-20 minutes before the flight closes the check in counter is moved to 1 or 2 of the ‘fight closing’ counters. Many of my fellow regular counters can be found hovering around the counter waiting for it to open because once its opened up to 70 people can be seen trying to extract themselves from the original check in zone and rushing to the special counters

Recently I arrived in good time only to find that the check-in area was completely full and overflowing for on every counter. Looking around I see and sense the anger and disappointment on many people’s faces as their joined a queue of 100’s of people.

Not overly happy and wanting to relax in the lounge but mindful of how the system works I went down to McDonald's and at exactly 20 minutes before the flight was due to close I headed back up. As I approached the late check-in counter the following appeared on the screen: 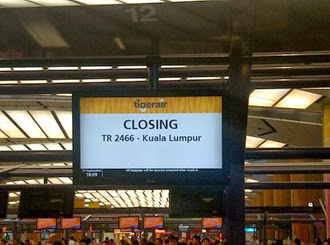 In the minutes that followed chaos, confusion and a degree of panic  ensued as 60 people tried to relocate from the other queues and I pity the check-in agent who had to rush to check all disgruntled people in.

As for me a sense of satisfaction occurred that I once again played the system and made my commute relatively stress free.

Posted by The man in seat 12A at 07:47
Labels: Singapore, Tiger Airways, Travel