A new restaurant & bar which opened to the public on the 13th Feb at the Pavilion in KL has generated a fair bit of excitement and will probably be the hottest place to go in February. The Market Hall restaurant and its sister bar Bedroom are from the same team behind The Apartment, Italiannies and TGI Fridays’s.

The restaurant concept is based around a European open market hall with shelves stacked with condiments and other delectables along with a visible kitchen area for diners to see. A key aspect of any food market is freshness and the Market Hall prides itself on the freshness of the ingredients utilising a farm to plate concept skipping any extra stops to remove unnecessary ingredients.

The menu is European style containing a variety of pasta, meat, pizza and fish dishes with the meat locally sourced and the pasta handmade every day. The jars and packets of food around the restaurant are available for purchase along with some take away items.


I usually avoid new restaurants for the first few weeks of their operation to allow them time to iron out any teething problems however I ended up at the Market Hall because a) I didn’t realise that it only opened on the 13th and b) it was my wife's birthday and she requested that we try it.

Being a new restaurant and valentine’s day I was expecting the worst with it likely to be full and having a limited set menu. Upon arrival we were informed that the wait time was only about 20 mins and that the full menu was available which was fantastic so rather than walk around the mall whilst waiting for a table we elected to wait in the bar area.

Due to it being early evening the bar was almost empty however it provided us an opportunity to look around and sample a few drinks in relative peace. The bar is quite dark so unfortunately the camera on my phone wasn’t able to produce particularly good pictures. With a name like Bedroom it was surprising that there were no beds, the seating compromising of dark coloured sofa’s, chairs and stalls.

Not really much to report on the bar other then the only draft beer available in a pint glass is Guinness. Tiger, Heineken and Paulaner are also available on draught but only in small glass. This is not uncommon in KL but personally I can’t understand why this is so and being English I’m partial to my beer being served in a pint glass. I’m keen to find out what the night crowd is like and will probably check out the place on a Friday or Saturday night.

After around 30 mins I received a call to inform me that my table was ready and we proceeded back through to the restaurant. We were shown to the table and then a few of the teething problems then began, causing myself to have to get up and ask for a menu and then after a further wait stop a waiter and ask to make an order. The staff were polite but not yet up to speed with the electronic pda style ordering system.

For a starter I ordered sliced topside of beef glazed in salsa verde served with poached egg. To try and ensure that the food comes as a 3 course meal rather than haphazard like some establishments in this part of the world the instructions were clearly articulated and understood by the waiter.

A short while later I was a little disappointed when my starter was brought out along with a side dish of vegetables from the main course. I sent the vegetables back which caused a little confusion but no real problem.

The starter was absolutely superb with the beef being very tender and the salsa verde having just the right flavour. I was a little surprised that the egg was cold and served as a salad item but it worked very well so no complaints. 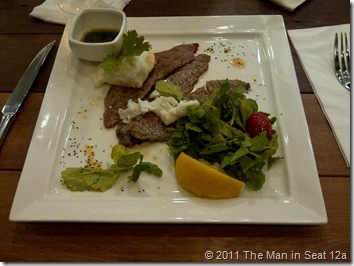 The drinks menu is quite comprehensive and contains several cocktails and shooters including flatliners which are mixed in the the adjacent bar. Our original choice of wine was out of stock however another was suggested and a nice touch was that the bar manager stopped at our table later to check that the wine was ok.

For the main course I had hoped to order the lamb balti pie however this had finished so I went for a medium cooked rib eye steak with accompanying vegetables which are additional order items and my wife ordered Tagliolini with fresh crabmeat and chilli wine sauce.

Unfortunately the teething problems surfaced again with the herb roasted potatoes being left off which caused a minor issue but this was managed and the delay was minimal.

Now back to the food and what can I say about it other than perfectly cooked and absolutely delicious!
The steak was cooked to perfection along with the broccoli and the potatoes when they arrived were well worth waiting for. I also tried my wife’s pasta and the combination of the crab, chilli oil sauce and pasta was absolutely delightful.


I’m a fan of fresh bread and it would have been nice if a fresh breadbasket was available with meals although I didn’t ask anybody if it was.

Whilst discussing what to have dessert a member of the management team (Nicola) approached us to apologise for the earlier issues and upon hearing that it was my wife’s birthday without prompting he rushed off and produced a special desert dish for us to share – many thanks!! 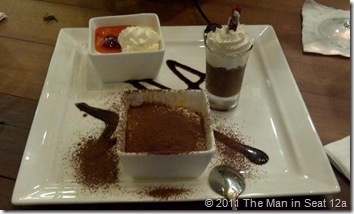 When the earlier teething issues occurred I’m pleased to say full kudos to the management team who were onto it straight away and I would like to express my thanks to the General Manager (Richard) for taking the time out to listen to our feedback and chat about the restaurant.

Many aspects of the service were good with my wine glass and drinking water refilled on a regular basis and a friendly management team. I hope to return within a month and sample the balti pie and will update you with my findings.