Smiths - The best fish and chips in SG?

One of the great things about living in this part of the world is the abundance of fresh affordable sea food. With so many cooking styles available it is surprising that fish and chips is a popular dish in Singapore, perhaps due to relative closeness to Australia or maybe just hangover from it's colonial past.

In Singapore there are several fish related restaurant chains which serve a reasonable fish and chips however the chips are your standard frozen type that you find in almost every other restaurant. As a Brit I have to say that there nothing quite like some good old british style fish and chips.

Up until recently the only british style outlet in SG was something found in the food court of a few malls and I can assure you that it was hugely disappointing.

Towards the end of 2010 Smiths Authentic British Fish & Chips opened in Tanjong Katong Road and I’ve been meaning to check it out for some time.

For the past few days the weather had been very british with rain and sunshine appearing at 15 minute intervals so I took it as a sign that it was time to make a visit to Smiths. 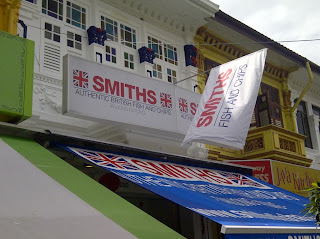 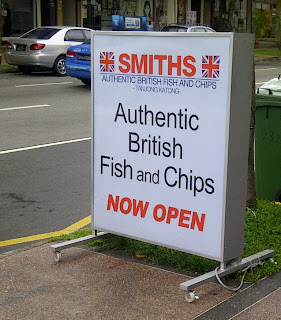 The restaurant is open fronted  and upon entering the familiar smell of a local UK chippy was in abundance and it was nice see a large fryer with the above food warmer as you would find back in the UK. 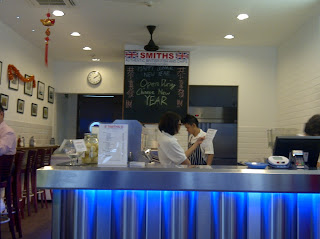 The food is ordered at the counter and the main items are:

There are several side orders available as well such as mushy peas, baked beans and pickled onions.

Today I opted for the cod and my friend tried the fishcakes.

Unlike a busy UK chippy the food is cooked fresh to order and despite there being only a few tables of customers the food took a little while to come. This is not a major criticism but more of an observation and is perhaps due to some preparation needed.

With Chinese New Year taking place at the end of the week we were given an ang pow packet which sadly didn't contain money but did have a money off voucher for a kids meal. 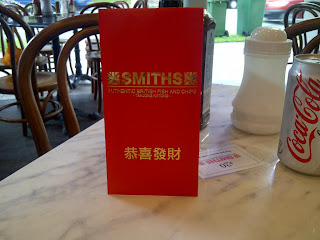 The food is served wrapped in paper and once ready is collected from the counter. Despite some negative comments on another food site I found the portions to be a good size as you can see from the pictures below.

The cod was fresh tasting with nice crispy batter however I found it a little too oily to be given top marks. The chips were the highlight for me with just the right texture and a fantastic flavour 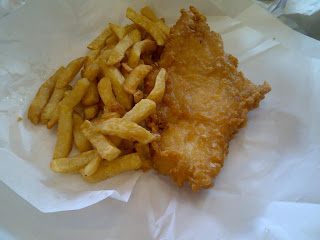 The Salmon fishcakes appeared to be home made and was very fresh, soft inside and very tasty. One point to note is that the flavour is very different flavour from the pre-processed types served in the UK 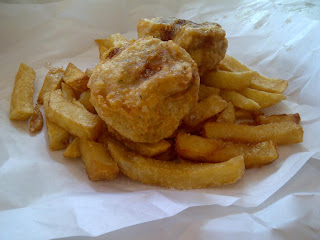 In addition to this I had a side of baked beans and not being a mushy peas lover I gave them a miss.

Price wise this isn’t a budget restaurant however neither is it overpriced with cod & chips costing SGD $17, fishcake & chips SDG $11, baked beans $2 and softdrinks at $2 a can

Whilst eating the incessant rain/sun cycle continued and in the relative coolness I almost felt like I was back in the UK on a summer holiday.

As well as some fairly standard softdrinks several beers are also available which include Boddingtons and San Miguel.

I thoroughly enjoyed my lunch I hope the oiliness of the fish is reduced and only then can it match that of my local chippy in the UK. Unlike most chippy's I know Smiths doesn’t sell meat pies and savaloys which is a shame because I’m rather partial to a pie and chips.

To my knowledge Smiths is the best british fish and chips restaurant in Singapore and I look forward to returning again.