Cadbury’s Dairy Milk – A review of the good, not so good and the downright ugly

From a very young age I’ve always been rather partial to Cadbury’s Dairy Milk chocolate and the various associated brands such as Buttons, Flake and Creme Eggs. So what is Cadbury’s Dairy Milk? it's a popular mass produced chocolate product available in multiple global locations and is not what a chocolate connoisseur would describe as one of the worlds best however it remains extremely popular globally.

I remember a defining moment of great disappointment back in June 2000 on a BA flight from JFK to London Gatwick when I realised that not all Dairy Milk bars are the same. During that rather tedious flight on a cramped BA aircraft I thought that a moment a pleasure had arrived in the form a small bar of Dairy Milk with the meal. Due to the excitement of seeing my favourite chocolate I decided to eat the chocolate bar before the dinner. I still remember the moment of disappointment when I took a bite only to find that the taste of the Canadian made bar was very different from the UK variety that I was used to.

A few months later I moved to Malaysia and was pleasantly surprised that most of the food shops seemed to stock my favourite chocolate although these were either made in Australia or Malaysia. Again disappointment quickly struck with the bars made in Malaysia tasting pretty awful and the Australian variant being passable when I really needed a chocolate fix.

From time to time the local Cold Storage supermarket in Bangsar Shopping Centre would stock the UK variant at hugely inflated prices and combined with the frequent trips to back to the UK it allowed be to keep a stash of UK chocolate in my fridge.

Several years later I moved to Singapore and noticed that most places only stocked the Australian bars, a few UK imports in Cold Storage or Market Place and the Malaysian made products being the specialist flavours and products. I thought this was a little odd when you consider that the factory in KL is only 300+ km from Singapore compared to Australia is several thousand kilometres away.

Around the same time I met a former senior exec of Cadbury’s Malaysia at a dinner and we had a good a discussion regarding the differences in taste and why the Malaysian made bars are not widely sold in Singapore.

From memory the key points of the discussion were:

I’ve recently been looking into the different taste etc and have also discovered that the following:

From talking to several people they also feel that the Malaysian made bars are inferior and whilst researching for this article I found some good reviews on chocolate amongst other things on Dougs Republic.

After reading Doug’s reviews I performed my own tasting session and was surprised by the findings. The Australian bars were much closer to the UK bars than I remembered and in the warm Malaysian climate they were definitely firmer.

The Malaysian made chocolate does not taste as milky as the UK/AU bars and the sweetness tastes rather artificial. Previously (>3 yrs ago) I’ve detected a bitterness in the local bars but not this time. I’m not sure if this is due to my taste buds or the recipe changing or maybe both! Although the taste wasn't as bad as expected I would still rather go without then eat the stuff made locally in KL.

The small bars seen the shops in KL and Singapore are all different sizes:
UK: 49g
Australian: 50g
Malaysian 40g 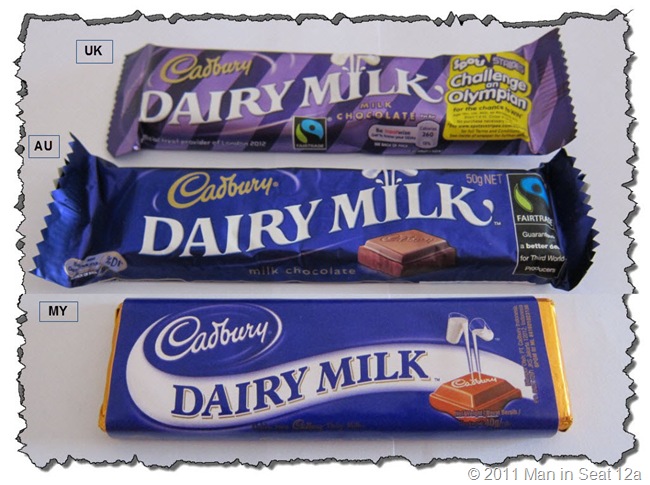 In Singapore the AU/UK bars retail for SGD $1.75/$2.15 and in Malaysia the bar is approximately RM2.5 so just like most imported food in Singapore its almost double the price of that in the UK.

So what else is different between the Dairy Milk bars? let’s take a look at the ingredients and nutritional values:


I’m not a food nutritionist so I’ll leave you to draw your own conclusion but for me if I could only eat one more bar of Cadbury's then it would have to be a bar from the UK regardless of what the above numbers stated.

Following the Kraft acquisition of Cadbury PLC there is a great deal of suspicion that Kraft will change the product and several small campaigns have been started. I seriously hope they don't change the taste of Dairy Milk in the UK and if they do the backlash from the UK public would likely be huge.

To give Cadbury's a chance to reply I emailed the UK and Malaysia offices but almost a week later at the time of writing they have not responded.

Posted by The man in seat 12A at 12:46
Labels: Food, General, KL, Malaysia, Reviews, Singapore, western