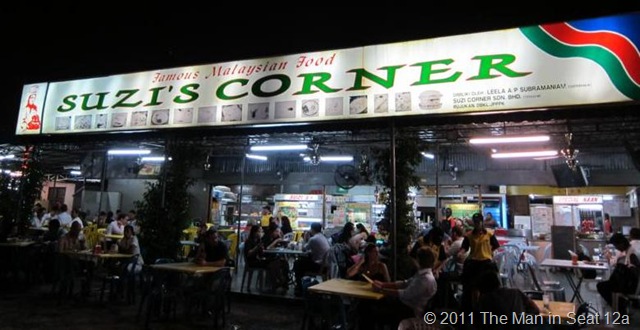 A good fillet steak is one of my favourite meals and when I first arrived in KL 11yrs ago I soon the discovered the Coliseum Cafe and its great sizzling steaks quickly became favourite of mine. A short while later while I can still recount a friend telling me about a place in Ampang called Suzi’s Corner which according to him served some of the best steaks in KL but was essentially a “shed/hut next to flyover” and was “very basic”.

Initially this didn’t exactly fill me with any enthusiasm but in Malaysia you soon learn it’s all about the food and not necessarily the restuarant decor with some of the best food available being served in the most modest surroundings.

Being rather sceptical at first I remember visiting Suzi’s and being bowled over by how tasty, tender and great value the steaks were. Over the years I’ve frequented the outlet although for some reason not as often as I should considering the quality of the food. With that in mind I thought it was a perfect time to check it out for a review.

At first Suzi’s looks like any other non descript eating place but on closer inspection this one has several differences in that there is usually a large contingent of Mat Salleh (westerners) and it serves beer. In addition to the Mat Saleh, Ampang Point has a large expat community and this combined with dinners from all parts of Malaysia’s racial spectrum gives Suzi’s a different feel from many other outlets of a similar setup.


Suzi’s corner has a good variety of food available with the usual Indian/mamak & malay fare but it also has some additional stalls by separate operators selling different food. One of these stalls is called Steak Hut and this is what has made Suzi’s famous due to the fantastic tender, tasty and affordable steaks it serves.

Timeout KL has a top 40 food places feature every month and Suzi’s Corner seems to be included every time.

Due to there being several stall operators you need to order your food & drinks from the different operators and when settling the bill each operator is paid separately. 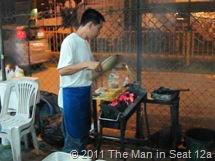 For drinks we started with a fresh watermelon, fresh barley and then proceeded to order several cans or Tiger beer. 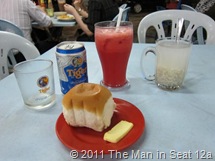 I ordered the highly recommended sizzling tenderloin steak which was served with a bread roll, fries, vegetables and brown sauce although black pepper or garlic sauces are also available. Owing to the bread role being quite small I also ordered a cheese naan to help soak up the sauce although when this arrived it was almost a meal in its own right.

The steak was served sizzling on a (very) hot plate with a large portion of sauce in separate bowl. The tenderloin cut was a good size but the portion of fries and vegetables wasn’t particularly big.

I asked for the steak to be medium cooked and with great anticipation I cut into the steak and it was perfectly cooked, being little pink in the middle and having a plenty of juice. As usual the steak was extremely delicious and I cannot find any fault with it at all.


The cheese naan and its associated side trimmings were very tasty and was almost a complete meal on its own.


My wife ordered grilled stingray, chicken & vegetable soup and white rice. The food was good and tasty and the soup contained a hearty portion of meat and vegetables.


Whilst eating several vendors circulate hawking their products but are not obtrusive and there is even a “resident” DVD seller so whilst eating you can decide which of the latest movies that came out the previous day you want to watch later.

In addition to food, Suzi’s also has a car wash concession which was reasonably priced and allowed us to get our Sportage washed for RM15 whilst we were fed and watered. 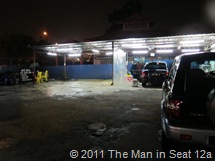 The price of the steak is now RM32 so on average it seems to increase by about RM1 per year. For the drinks and other food it came to RM47 which is reasonable when you take into account that I ordered 3 cans of Tiger beer.

I will return to Suzi’s again soon because of the quality and variety of food as well as the availability of beer.

One final thing to nore is the spelling, its Suzi's and not Suzy's becuase I note that so many sites have spelt it incorrectly.

Suzi’s Corner is located at Ampang point on the corner of the road junction of the MRR2. To get there if you are heading from KL along Jalan Ampang just before Ampang Point turn left for the MRR2 and almost immediately on the left is a small turn for Suzi’s Corner.