We recently took a trip to Bangkok and thought we would try Air Asia’s online/mobile check in service. Between us we have a BlackBerry and an Iphone and found that both applications worked well. When using a phone you are issued a bar code which you need to validate and then a boarding pass is printed from the terminal.

Upon arriving at KL’s LCCT we headed for the self service check in machines only to be initially confused over which terminals to use. 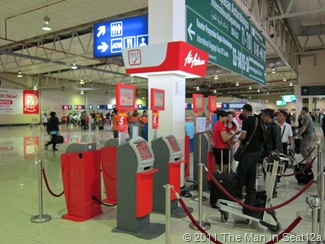 The web/printed boarding pass machines are on the right of the pic and mobile phone readers are on the left. Its disappointing that the separate machines are needed however I believe that this will be addressed at some point in the future. 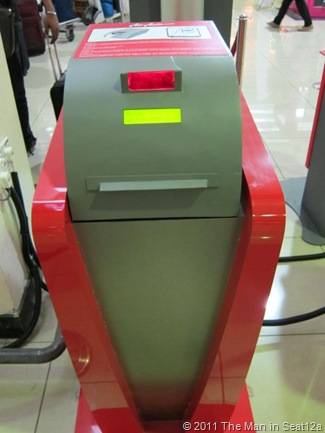 The check in process worked well and we then proceeded to the baggage drop counter. Fortunately the counter was not busy but my perception is that if you need to drop baggage then the process takes just as long as it would if we checked in at a normal counter.

Just after check in I discovered this Police View box. With the modern day CCTV installed and armed patrols walking around is there really a need for a policeman to stand on a wooden box? 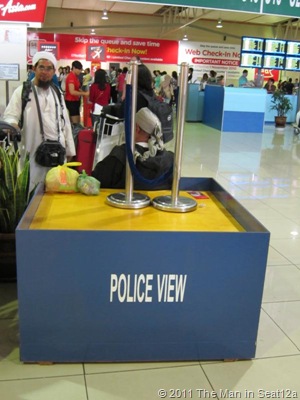 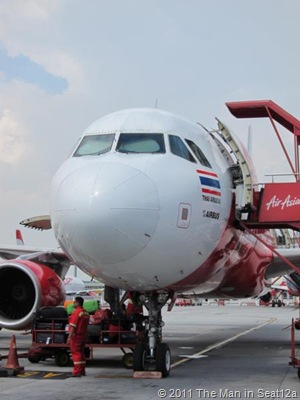 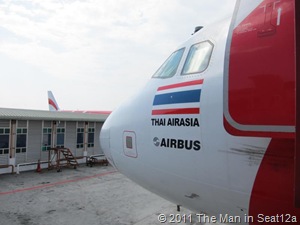 Arrival at Bangkok’s Suvarnabhumi airport was via a domestic gate which meant slow a disembarkation whilst we waited for buses to ferry us to the international section.

The airport has been the centre of much controversy with the current complaint being around the immigration queues. Unfortunately we were not sparred and the hall was packed with the slow working officers taking almost 1 hour to process our queue.

The local media has reported that the problems are compounded by the immigration department not having any budget left to pay overtime so the airport authority will be paying millions of Thai baht try and prevent even more problem during the upcoming festive season.

Bangkok is now the proud owner of an airport express train with services being mixed between express and commuter stopping trains with the latter extended to Phaya Thai which is linked to the Skytrain station . The express train to the City Air Terminal takes 15mins and costs THB 150 and the city commuter train takes 30mins costs THB 45.
Depending on where you are staying and the traffic situation it could be much quicker however I know that the traffic around the City Air Terminal at Makassan can be very congested. Owing to us arriving early evening and staying just off Sukhumvit we decided to take the commuter train to Phaya Thai and then take the BTS to Nana.
The train was busy and we were lucky to get a seat however the ride was smooth and journey passed quickly. Upon arrival at Phaya Thai we found that there is no down escalator and the single lift was very small which resulted in a queue forming.
The connection to the BTS involves some staircases and at Nana station there is a long set of stairs to descend which is not easy with a heavy bag.
Considering that this is an airport link its disappointing that the designers haven’t seen fit to provide sufficient ease of access for people with baggage.

The train does provide a fast value for money alternative to taking a taxi and can be usful is you have light luggage and arrive in peak times.

Posted by The man in seat 12A at 14:31
Labels: Air Asia, Bangkok, Flying, Thailand, Travel