In the past I’ve always tended to stay away from the English/Irish pubs in Bangkok and prefer to eat/drink in less contrived places. Perhaps as a result of being away from the UK for so long I started to have a greater desire to sample some UK food such as Sunday Roast Dinner and real ale.

After a quick morning raid on Chatuchak market to pick up some items we found the previous day it was time for lunch. For some reason the thought of a relaxing roast dinner came to mind and after a quick check on the internet I found several options not too far away at the other end of Sukhumvit road. In addition I thought it would be a good place for a blog review.

Owing to the Londoner pub being a brew pub and having a buffet lunch our minds were quickly made up and we set off. The pub is easy to find being on the corner of Sukumvit Soi 33 in the basement of the UBC II Building. 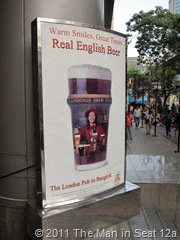 When we first entered the I was surprised at the size of the pubs dark cavernous interior and large buffet which its generous selection.

The pub was very quiet although we decided to try it anyway and certainly have no regrets. The buffet lunch is served from 12-3pm and then dinner from 6-9pm and includes a selection of fresh salad, roasted meats and deserts.


The cost by local standards is quite high at THB 470 however for this kind of meal it's reasonable especially when a Burger King Whopper meal at Suvarnabhumi costs more than THB 300.

I was looking forward to trying the home brewed Londoner’s Pride Cream Bitter and have to say that I enjoyed it very much. As a big fan of Fullers London Pride this wasn’t too far off the real stuff and made a change to the keg conditioned London Pride served in Singapore. 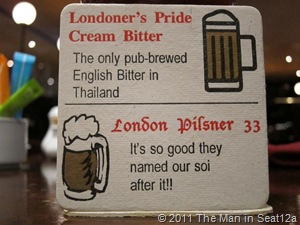 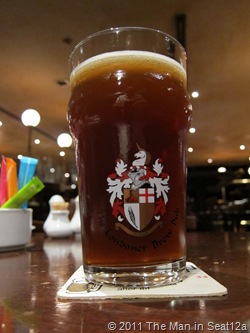 The brewery is located towards the rear of the pub and some of the equipment can be seen in the picture below. 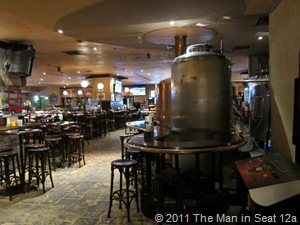 My wife is not an ale fan so she ordered a mojio and when it arrived in a pint glass I knew that we would be in the pub for a while! 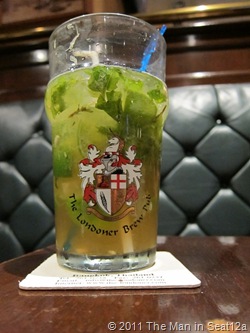 Due to us arriving quite late we only had around an hour of buffet time remaining so we quickly got to work.
I skipped the starters and went straight to a big helping of roast beef, lamb, Yorkshire pudding, roast potatoes, cauliflower cheese and other vegetables.

The food was nice but certainly not gourmet or even the best roast I’ve had but was tasty so no complaints. The service was mixed and perhaps because the pub was quiet the staff tended not to be that attentive although this wasn't really an issue to us on this visit. 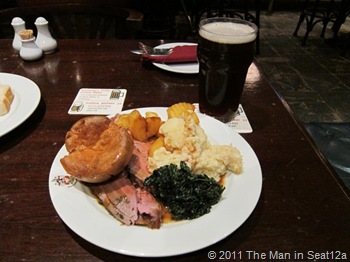 After a refill I tried a few starters which included salad, a whole salmon and pate. The desert section looked good and there was a selection of apple pie, ice cream, cakes, fruits and other delights. The picture below doesn't show the rest of the table which was pretty full with other items to eat. 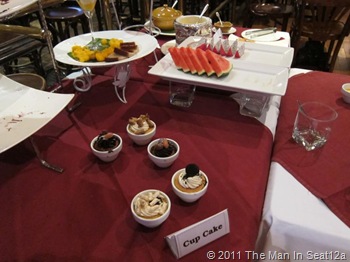 Free tea/coffee is also included in the price which is a nice addition for a post meal drink.

After the buffet finished we picked up a copy of the UK Sunday newspapers which are provided via Newspapers direct. I usually read the UK newspapers on the internet however there is nothing like reading the broad sheets whilst supping a pint of ale.

Unfortunately the pub also had a copies of the tabloids which kept my wife amused...... 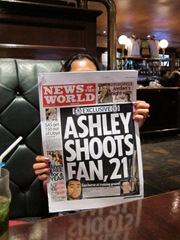 Whilst deciding where to go we noticed that there were several local English style pubs which were commended and took quick look at them:

The Bulls Head – a traditional style pub that seemed busy outside but quiet inside.

The Robin hood – This pub was very busy and many people seemed to be eating which was a good sign.

The Londoner has some mixed reviews and not having been there at other times i’m unable to comment on the atmosphere in the evenings or during big televised sports events.

We really enjoyed our relaxing lunch and although the food is far from gourmet we would recommended this to anybody who likes a relaxing buffet roast lunch.

Posted by The man in seat 12A at 23:16
Labels: Bangkok, Food, General, Reviews, Thailand, western