Those who know me well will know that I’m a big fan of Fullers Beer with London Pride and Honey Dew ranking amongst my favourite beers. Whilst I can get a keg version of London Pride in Singapore there is no substitute for the real thing i.e. cask conditioned.

For many years I worked in west London however for some unexplainable reason I never managed to make a visit to the Fullers Griffin Brewery located next to the A4 in Chiswick. Due to its location, lack of close public transport (tube) and heavy traffic I’ve also ended up omitting it from my past 4 or 5 trips back to the UK which I consider a big mistake.

Fuller Smith & Turner P.L.C. is London's last remaining traditional family brewer. Beer has been brewed on the site of the Griffin Brewery in Chiswick for over 350 years. The partnership of Fuller, Smith & Turner was formed in 1845 by John Bird Fuller, Henry Smith and John Turner. Members of the founding families are still involved in the business today.

A littlle bit of info about fullers taken from the web: "Fuller’s is best known as the brewer of London Pride, the UK’s leading premium cask ale, as well as many other award-winning ales such as Chiswick Bitter, ESB and 1845. Three of Fuller’s beers - London Pride, ESB and Chiswick Bitter - have been named Champion Beer of Britain, a record unmatched by any other brewer. Fuller’s range now also includes Discovery, a blonde beer launched in 2005."

Fullers have also made several acquisitions and details can be found on their corporate site.


The brewery offers tours 5 times a day on weekdays only for a reasonable GBP12 with a slight discount for fees paid in advance. From personal experience the tours get quickly booked up several days in advance so advanced booking is essential.

The tour lasts for approximately two hours and includes an inside into the history and culture of fullers, the beer making process and finally most peoples favourite part which is the tasting session in the Hock Cellar.

Due to the Griffin brewery being a working site the tour involves a lot of walking up and down industrial staircases around the machinery so it's not really suitable for people with walking difficulties or fear of heights.

Its a long way down!! 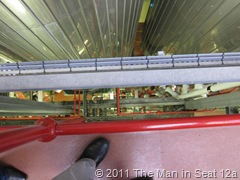 I personally found the tour interesting and informative and the tasting session was very generous with only my driving duties preventing me for sampling another round.


London Pride is my favourite beer from Fullers. 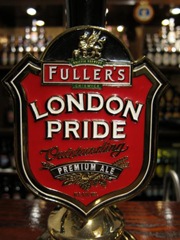 Back in 2001 I discovered Honey Dew beer which was served as a cask conditioned ale however our guide said that because its best served chilled its now mainly sold as keg conditioned and the keg beer on tap in the Hock Cellar was very good.

The brewery also has a well stocked stop including plastic take home casks of beer and Fullers branded goods.

I thoroughly recommend this tour for any beer lover visiting London and if time and weather permit there are some nice Fullers pubs nearby on the River Thames which are worth a visit.