KLIA Express in need of refurbishment

Owing the awful taxi system at KLIA being unable to cope with peak times I often take the KLIA express when returning to KL on a Friday evening.

Whilst this train is hardly a high speed express its pretty useful to get to KL Sentral when the traffic is bad or there is no taxi however the downside is the relatively high fare of RM25 1 way.

The service has been running for around 10 years and the interior of the carriages is starting to show its age. More and more often I’m finding that the seat covers are worn or dirty and the air conditioning isn't working correctly which results a stuffy and musty smelling train. 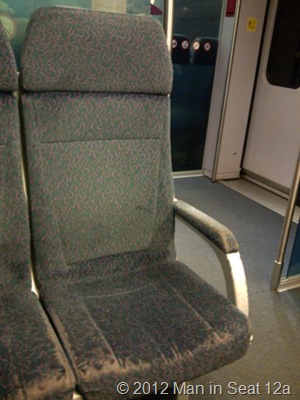 In addition many of the internal and external windows have a coating making it either hard to see out or looking gloomy and dirty. 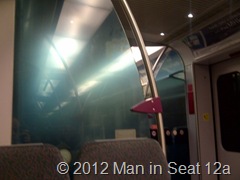 In addition I cannot fathom out why the luggage racks are placed half way down the carriage which makes taking suitcases etc into the train rather difficult. This really is a stupid design decision for an airport rail link train and having seen other Siemens trains in Europe I can only speculate that its must have been requested by the customer!

Malaysia has a bad record of train maintenance with KTM ending up cannibalising other trains for parts, many delays and too many derailments.

Posted by The man in seat 12A at 22:29
Labels: General, Malaysia, Railways, Reviews, Travel